“Night Hon.” Lani kissed Mike, her husband on the check. It wasn’t a passionate kiss just a friendly kiss goodnight. With a toss of her blonde hair and a flip of her hand, she acknowledged the other three men seated at the table.

“Nice ass,” Troy called to her retreating backside. Without turning, she flipped him the bird.

Poker night! Ugh, a night of beer, cigars, rude noises and smells. It was a night she could cheerfully do without but Mike enjoyed it so much she humored him. Besides, she didn’t mind a night curled up in bed with a good book. Around page fifty-three, her eyes began to droop.

She’d fallen asleep to an anthology of erotic stories. The last tale of a well-hung hero fucking his boss’s wife in the pool house manifested itself in her dream. Damn, if it hadn’t put a wad in her panties. Throwing off the covers, she ran her hand down her sheer gown. The mirror reflected back a sleep tossed woman with peaked, visible nipples. She mussed her hair seductively and licked her pouty lips. She wanted to make sure Mike would be interested when she woke him.
The couch was empty and so was the kitchen but a stream of light under the garage door alerted her to his whereabouts. Mike had just bought a new hotrod and he couldn’t resist showing it off. The guys had drooled over it for an hour before the cards came out. Mike probably had to kiss it goodnight!

“Fuck that is so hot.” It was Troy’s voice. He was still here, that was going to delay her plans. She cracked the door open hoping to get Mike’s attention and hurry him along.
“That’s right man, take it all.” Lani forgot she was going to hide behind the door so Troy couldn’t see her. The sight in front of her riveted her gaze. Her husband, her naked husband was on his knees in front of an equally naked Troy.

Troy’s eyes rose meeting hers, a smug grin curled his lip. His hands laced through Mike’s hair as he fucked his face. “Yeah, use that tongue. Does your wife suck cock this good?”

Troy pulled back on Mike’s head and she heard his cock pop out of Mike's mouth. “Your ass should be ready for me by now.” Troy moved and laid Mike over the hood of the hotrod with his face turned away from her. “Lie there just like that and don’t move.”

Troy angled his body so she could watch him lube his cock. It was massive, bigger than Mike’s and his was over nine inches. She’d measured.

“Hope you’ve been wearing that plug I gave you. Cause I get a little carried away fucking virgin ass.” Lani’s knees weakened and she sank to the floor waiting for her husband to be penetrated. Sweat broke out on her brow and she licked her lips. Moving her panties to the side her fingers slid into her wet slit. Her heart pounded furiously and most of the blood pooled in her clit.

Troy spread Mike’s cheeks and she could see the tight little bud open slightly. Troy watched her as he speared one lubed finger into his ass. Mike’s breath hissed out and he started to move. She leaned forward watching, all the while penetrating her own tight hole with two fingers.

“Easy. Stay right where I put you. I’m just loosening you up a bit.” Troy rimmed Mike’s hole, working his finger in and out. “You just lie on your hotrod while I put my hot rod up your tight ass.” A strangled sound erupted from Mike but he didn’t speak. Lani remember her first time, the pleasure and the pain.

Troy moved into place behind Mike blocking her view. Then, he turned nodding his head at Lani urging her forward to kneel at his side. She hesitated only a moment. When she reached Troy’s side he pulled at a strap of her gown indicating he wanted it off. The sheer gown fluttered to the floor revealing coral tipped breasts and a softly rounded stomach.

Troy’s cock looked so good she wished it were her ass he was getting ready to split open or that she was the one splitting Mike open. Their eyes locked for a moment. “Soon.” He mouthed the word.

His cock nudged Mike’s ass. The head slipped in and Mike went up on his toes. “Easy,” Hissed Troy from between clenched teeth, another inch burrowing in and Mike shifted trying to find a grip on the car.

Troy’s fingers dug into Mike’s ass hard enough to leave bruises. Troy pressed slowly forward.
“Just do it man. Just do it.” Mike’s tone pleaded as he thrust his ass backwards. Troy needed little encouragement and with a growl, he thrust forward burying himself balls deep.

Lani cried out at the sight, her own fingers working overtime on her clit. For a second she worried Mike had heard her but she realized that would be impossible over the male grunts and slapping flesh.

“It’s gonna be even better when I fuck her in the ass while you jack off.” Lani gasped at the thought. Mike’s eyes flared with anger but he couldn't complain with his ass still full of cock.

Good for the imagination. 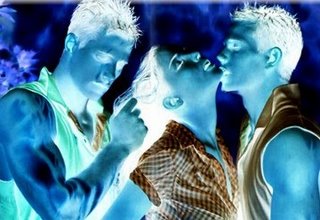 Just what I need to get the creative juices flowing. So to speak!

Dominating my Man posted at Literotica.

I've been working on love scenes today and needed inspiration!

Dominating my Man!
By, L.A. Day