Time is running out!

February 28, 2009 is the last day to enter my HUGE GIVEAWAY. Want to win a Sony PRS 505 ebook reader or a signed copy of Warriors in Time? Buy any L.A. Day ebook from Ellora’s Cave or Cobblestone Press for a chance to win. Complete details are on the fun/free page of my site.

With February coming to an end, Spring is around the corner and I can't wait. Summer is my favorite time of year. There's nothing better than laying in the sun, reading a good book and watching some half dressed hotties!

Have a good one,

Next Saturday I’ve been asked to give a presentation at my local RWA chapter on writing love scenes. Those of you that know me know I’m an introvert and hate public speaking but I agreed to do it anyway.

From reading blogs and assorted articles I know that writing love scenes is the worst nightmare of many writers. However, I don’t feel that way. I enjoy writing love/sex scenes. I probably enjoy writing them more than most scenes if you’ve read any of my work you probably guessed that. LOL

Now, I’m wondering what you all think. Do you enjoy writing love scenes? If not why?
Any information you can provide will help me with delivering an effective and helpful presentation.

Just a reminder, my Giveaway is still going on.
From now until February 28, 2009 buy any L.A. Day ebook from Ellora’s Cave or Cobblestone Press for a chance to win a new Sony PRS 505 ebook reader or signed copies of Warriors in Time. Complete details are on the fun/free page of my site. 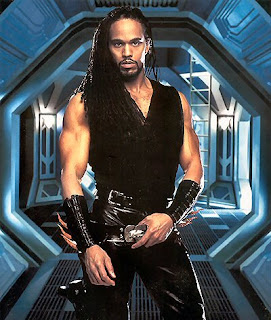 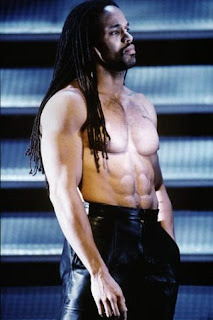 I'm working on a sci-fi and I needed a little inspiration. Who better???

Blurb:
Ex-prostitute and newbie vampire Amber isn’t thrilled to discover her future is reminiscent of her past. She thought she’d put her past behind her, but when her sire teaches her to feed her immortal needs, she once again preys on men to survive.

Marcus has lived alone for many lifetimes. He is an instructor to newly turned vampires and Amber is his latest pupil. He has had many lovers but she ignites a fire in his blood. Amber tries to resist Marcus’ allure. She’s taken enough instructions while lying down. This time, she’ll learn on her feet because submitting to this dominant male could be addictive.

Marcus is ancient, powerful, unmated—a threat to his kind. His very existence is in peril. He has one last chance. Find his mate and bind her to him.

Excerpt:
Amber shifted in her seat. “What did you see when you read my mind?”

“I saw your death.” His gaze locked onto hers.

“U-us?” she stuttered as she remembered some of the images he might have seen.

“You fantasized about having sex with me.”

Her cheeks flushed and her stomach clenched. “I didn’t.”

He cocked a brow. “And you fantasized about me turning you over my knee.” His palm stroked the length of his thigh.

Oh my god! Did he have to pick her most wicked thoughts out of her head?

Moving quickly, he scooped her from the chair and sat down with her across his lap.

“What are you doing?”

“What? Hell no.” She arched her back and kicked out, trying to break free.

“You need your arse whipped for what you did earlier and since I know you’ll enjoy it.”

“Too late.” His grip was much too strong. It was useless to fight as he held her easily across his lap. “Go ahead and fight. It will up the energy flow.”

“Pervert. Is this how you get your kicks?” she hissed, feeling the growing erection pressed against her hip.

He chuckled as he pinned her legs between his. Her belly lay across his thighs and he held her down with a hand to her back. His free hand slid along her bare upper thighs causing a shiver to race up her spine.

“I’m not the only one who fancies this.” Material ripped as he tore the mini-skirt out of his way. He let out a harsh breath and it fluttered across her naked cheeks.

“That was Lena’s skirt,” she admonished.

His hand cupped one cheek. “She has many more.” His fingers wrapped in the wisp of material that comprised her thong. He tugged and twisted the material, dragging it across her sensitized clit.

Her breath drew in sharply at the powerful sensation. “Don’t.” She glared over her shoulder at him.

“Fine. I will attend to other business.”

Her breath hitched in her throat at the first stinging swat to her ass. Gritting her teeth, she refused to utter a sound as he applied four more slaps to her bottom. Each slap sent a ripple of sexual energy through her body. By the fifth slap, her thighs clenched together. Amber sighed when he stopped, until he tugged on the thong again. 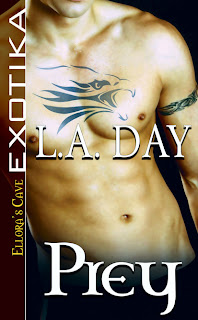 Prey by LA Day releasing from Ellora's Cave on February 13th!
Blurb:
Ex-prostitute and newbie vampire, Amber, isn’t thrilled to discover her future is reminiscent of her past. She thought she’d put her past behind her, but when her sire teaches her to feed her immortal needs, she once again preys on men to survive.

Marcus has lived many lifetimes alone. He is an instructor to newly turned vampires and Amber is his latest pupil. He is very unhappy when he learns that she has fed without his guidance. But, Amber can’t afford his brand of instruction. She’s taken enough instructions while lying down. This time, she’ll learn on her feet because submitting to this dominant male could be addictive.

Marcus is ancient, powerful, unmated—a threat to his kind. His very existence is in peril. He has one last chance. Find his mate and bind her to him.

A storm with high-speed, damaging winds is heading this way tomorrow. Will we ever get a break?

Sin of the Past @ Cobblestone Press
Snippet:
“Smoking hot! Right from the beginning your interest is peaked by the conversation Sara has with her friend before she heads out of town. The reaction Sara has to seeing Cein again after so many years had me on the edge of my seat and my anticipation level high.” Overall rating:
Reviewer: Jacquelyn R. Ward @ TRS

Set in Stone @ Ellora’s Cave
Snippet:
“Right off the bat, the reader is given an interesting paranormal twist to sink their teeth into. Sarah and Jacob have an underlying passion for each other that lies just below the surface waiting to be unleashed. I enjoy reading something out of the ordinary, and Set in Stone was exactly that.” Reviewed by: Dawnie @ FAR

Greek Temptation @ Ellora’s Cave
Snippet:
“In the paranormal genre, there is nothing I love to read more than an alpha shape shifter – especially one as devastatingly handsome and dominant as Lyk.” Reviewed by Talia Ricci @ Joyfully Reviewed

Out of my slump!

Between my surgery, complications, hormones & power outages it seems the fates have conspired against me in recent months. However, yesterday for the first time in several months, I submitted a manuscript to Ellora’s Cave and I almost have the sequel to it completed as well.

I’ve always heard of writer’s block but this is the first time I’ve experienced it for any length of time. It’s not something I want to experience again…ever. Although, I do realize I most likely will. Hopefully, I’ll have long stretches of productivity between the slumps.

In the past, if I wasn’t in the mood to write, I’d pick up a good book and read. That usually did the trick. Didn’t work this time though but I did get to read a few good books. I won’t complain about that.

During my slump, I started and stopped several manuscripts as I attempted to find inspiration. Now, I have seven partially completed manuscripts and my slump appears to be over. Keeping my fingers crossed.

So any writer’s block stories out there? How long did it last and what did you do to get the creative juices flowing again?

Have an awesome weekend!
Laura

I'm thrilled to say that my power is back on. However, I'm now buried in emails and other things I haven't been able to get to. And of course, it's snowing again. Today was the first day in a week that we've had school here and they'll probably release early if it doesn't stop snowing. URGH!!!