Under a Feral Moon -In Print 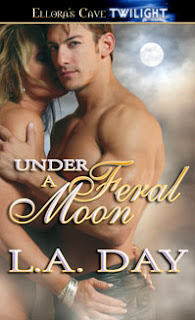 Gionne is alpha male of the Valde wolf pack. He wants Jenna, a feline shapeshifter, as his mate but the fates are manipulated to separate them before the two breeds can join.

Two years later, the felines need a favor and Gionne will help for a price — Jenna. Gionne holds Jenna as collateral for the debt. Holding an unmated female that comes into heat within the pack proves dangerous. He takes her innocence, claiming her as his mate to protect her.

Jenna gave her heart to Gionne only to have it broken. Now she must accept Gionne's terms in order to save her pack. Seeing the wolf stirs all the old feelings but Jenna refuses to submit to the alpha until he uses dominant persuasion. Just as Jenna begins to accept her feral mate, a pack member plots to get rid of her.

A malevolent force that doesn't want to see a merger between the two feral breeds works to separate them. Gionne introduces Jenna to the pleasures of a ménage in order to ensure her safety. Even with the help of another male, it proves difficult to keep Jenna safe from unreasonable prejudice.

Leon's life is good. He's alpha male of his feline pack and females are plentiful. Then he meets Riza. The lupine female fascinates him. For once, he's found a female who holds his interest above all others.

Riza is in heat and Leon is the focus of her lust. She can't resist him and surrenders her heart, but not her secret, to the dominant feline.

Leon believes he betrayed Riza. Riza knows he would have. Can she trust him enough to offer her submission before the entire pack? Only by sharing Riza with two other males can Leon prove his love and commitment to his mate and her pack.

Dirk Valde's life is in crisis. As guard of the Valde wolf pack, he has a plan for his life until a chance meeting changes everything. Discovery of one's lifemate is usually a joyous occasion, unless that lifemate makes you accept a long-denied truth. Dirk must come to terms with the realization that his lifemate is not only of the coyote pack but is also a male.

Rian's touch ignites passion within Dirk and he can no longer deny his feelings. He's willing to accept a relationship with the alpha male on the condition that they are equals in the bedroom.

Rian's former pack cannot accept that he is homosexual and he's certain the Valde wolf pack will feel the same way when they discover Dirk's secret. Dirk must survive a shattering misunderstanding and a vicious attack before he can find true acceptance within his heart and his pack.

Buy Under a Feral Moon

School started here yesterday and my daughter had her first test on one of the books assigned for summer reading. I won't mention the titles but I will say the books were extremely boring and one of them was almost impossible to follow. My daughter read them because I made her but many of her friends didn't read their books. I'm wondering why can't they assign books that a teen might actually enjoy reading. Forcing students to read books that hold no appeal certainly won't teach them a love of books.

I was never assigned summer reading as a child but I read for the love of it. Very few, if any of my daughter's friends read for fun. If schools made better selections on assigned reading, I wondering would that change?

Have a wonderful weekend!